It is with sadness that I have to inform you that I haven’t ordered for the last two months due to the passing of our dearly loved Dalmatian Polly on the 9th January (see pic of her last swim). 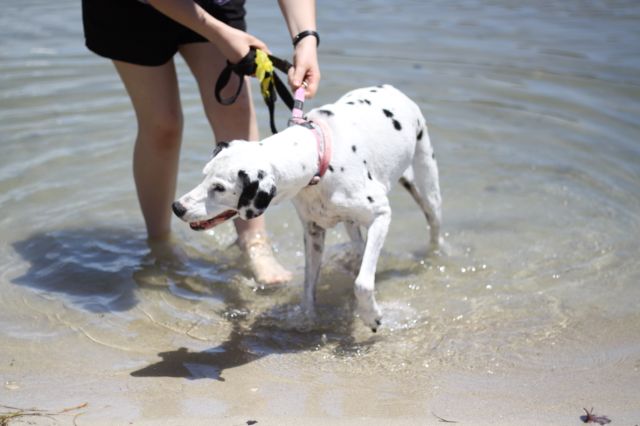 She had lived to the grand old age of 14yrs 9mths and I am convinced that it was the Barf diet that kept her so fit and healthy for so long.

As you can imagine, we are missing her terribly and although we said, ‘no more dogs’, we are now considering some options. A home without a dog can be very lonely, even when it’s full of humans!

If, and when we get another dog, we will certainly begin ordering again.

Again, thank you for your wonderful service all these years and keep up the great work.

Testimonial on The Pet Chef – Pyoderma

On September 1st 2007 I rescued a Samoyed dog (Sakara) from the pound. He looked very moth eaten, and my vet diagnosed him with a chronic skin infection named Pyoderma. His tail was bald, and he had hardly any fur on his trunk. His chest was covered in scabs. The vet concluded that the infection was secondary to allergies, and that he would be allergic to pretty much everything. He was commenced on Cephalexin (antibiotic) for three weeks, and bathed in Malaseb three times a week for two weeks.

He improved after his course of antibiotics, but for the next eighteen months he would be on Cephalexin for three weeks and off them for two to three weeks, and then I would have to recommence the drug. He also needed Prednisolone to control the itching.

The Pyoderma forms crusty scabs on the hair follicles, and he would also have a musty smell. I would clear one spot up, and it would break out in another area. At no time was he without the infection. As the infection is at the base of the follicle, the hair breaks off, hence the moth eaten appearance.

In desperation, I went to a Naturopath, she recommended no antibiotics, and a new diet for him. Unfortunately, he broke out again, and I recommenced his course of drugs. I also had him tested for an under active thyroid, and his test came back positive. He commenced on Thyroxine, and his fur on his trunk did improve.

I spent hours on the net researching Pyoderma, but there appeared no other course of action that what was already being done. I next purchased a very expensive spray, Cortavance, in hopes that I could stop using the Prednisolone, unfortunately, that didn’t work either. I was having him bathed in Malaseb every fortnight. I spoke again with the vet, she said that I had very little chance of it resolving, but all I wanted to do was be able to control it, but there seemed little hope of that either.

In March 2009, Giovanni from Ellenbrook Swan Valley Mobile Dog Wash suggested I try The Pet Chef. He had met Gerry, (owner of The Pet Chef) and he told me about the diet that he prepares. By now, Sakara’s muzzle was covered in crusts, as well as the top of his head and it was on his chest again. Giovanni had by now got to know Sakara very well, and when he was wet you could see the extent of the infection.

I went to meet Gerry on March 27th 2009, I listened to him extol the virtues of his diet for dogs, but to be honest, I had little faith that it would do very much. I also researched the Barf diet on the net, but I was still not convinced that it would cure Sakara.

Sakara commenced the diet on March 27th 2009; I ceased using commercial dog biscuits or dog food totally. One week later, I thought I was imagining it, but his muzzle appeared to be clearing up, the top of his head also felt less crusty. He had finished his course of Cephalexin on March 21st 2009. Never before had there been any improvement when he was not on antibiotics. Sakara was due for his fortnightly bath on April 4th 2009, and I was able to ring Giovanni and cancel. He was amazed when I told him of Sakara’s progress. This was the first time for months that he hadn’t been bathed fortnightly. He was not chewing himself either.

Sakara also seemed to have more energy; I noticed that he was full of beans, even after we returned from our walk. Every night he comes over to me with a toy wanting to play, he had been quite sedate prior to the diet. He also seemed happier in himself, probably because he wasn’t itching. 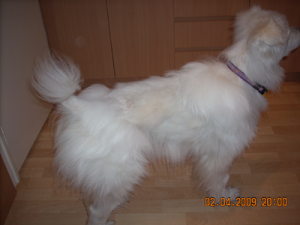 Giovanni came to bath Sakara on April 11th 2009; he was stunned how much he had improved. His muzzle now was nearly totally clear of any crusts, the top of his head was also much improved. When Giovanni was rinsing him, the water was a yellowish colour; Giovanni pointed out that Sakara’s skin was pink, always before it had dark patches on it. Nearly the whole of his tail was a healthy pink, only the tip is patchy. Giovanni gave him a second bath, and we decided that the residue of the Pyoderma was actually washing off him. Sakara has now been off antibiotics for three weeks, and there is no sign of having to recommence them.

He still has some areas where the infection is apparent, but I am confident that within a couple of weeks, these to will be resolved.

I cannot recommend this diet highly enough, I have spent a fortune on drugs, and vet consultations and I thought that Sakara would go through the rest of his days being plagued by this infection. He has been on this diet for only two weeks, and there has been a huge improvement. Anyone who has a dog with a skin infection will appreciate what it is like to constantly battle with it. I will never feed him anything else, and I have recommended to others the benefits of this diet.

For someone who was quite skeptical, I have been amazed by the speed and extent of the results. Even when he was on the Cephalexin, it didn’t clear the infection up to the same degree.

Sakara has not yet got the coat of a Samoyed, but I am confident that in a few months he will have the beautiful coats that the Samoyeds are renowned for. I cannot thank Gerry enough for his wonderful product.

We just wanted to share with you the change for the better in our Staffy Marley since he has been on the BARf diet and eating your products. He has only been eating the Scavenger’s Find, chicken necks and turkey necks for the last week and the change has been miraculous. Marley has suffered from severe skin irritation and what appears to be a wheat/cereal allergy which has caused him to constantly lick and chew at his paws, and his skin was covered in a rash with lots of small lumps which would drive him mad with the need to scratch and chew at himself. We had only found one brand of dog food (tinned Chum) that he could eat with the minimum of symptoms but they never went away completely, and his feet were always swollen and red and he always had pus between his toes and pads.

So last week my husband saw a van that was driving around in our area and he noted the website advertised on the van and little did we know then but he had just found the answer we had been looking for for so long. After only two days on the The Pet Chef food, Marley finally had solid poos rather than the almost liquid cow pats he had been doing for the last 4 years of his life, and his paws seemed much less red and inflamed and he wasn’t scratching as much. After a week on the diet he is a much more settled dog, he sleeps better, his coat is so shiny and getting softer every day it seems and he is definitely less itchy. He is doing tiny, well formed poos which shows he is digesting almost all of what he is being fed so there is also the fact that the food isn't being wasted by going straight through him undigested.

I will give another update in a few months time and I am sure it will be just as good, if not better than this one. I am so glad my husband saw that van and noted the website and I know Marley is too. Thanks so much.

Hi, I just wanted to thank you for the great products that you supply. I have two dogs, an 8 year old black labrador and a 20 month old white boxer. Floyd, my lab, has suffered with contact allergies all his life and has been on syeriod tablets for the last 7 years. Miss Milly, the boxer has developed the same problem and it seemsto be that they are both allergic to the grass on my block of land. I have restricted their time on the grass but unforunately it is impossible to make that 100% of the time.

Although Floyd takes his pills every other day they have never completely erased the problem and he still scratches a lot and licks his feet and smells pretty bad when the problem is at its worst.

Both dogs have been eating the ‘Scavengers Find’ and chicken wings for 2 weeks now and although the problem has not completley gone – and i realise with contact allergies this is probably not possible – but with this great product i’m confident that thier immune system is strengthening. Their coats are shiny and Floyd smells sweet! The horrible smelly poohs have disappeared, hoorah. In fact there is very little wast deposited on the lawn at all these days, and what there is, is normal and healthy! Hopefully i’ll be able to reduce Floyd’s medication to a less harmfull dose in the not to distant future. They love the food and i had no problems with transition. Thank you once again for a great product.

Just wanted to let you know that 6 months ago the Vet recommended that our dog needed dental treatment to remove tartar from all of its teeth. I started using your food for ‘Jess’ about 4 months ago. We returned to the Vet last friday and now all the teeth are clean. There is NO tartar and NO further treatment required. I am very happy with you products that you are supplying, and will continue to use it saving me a lot of money.